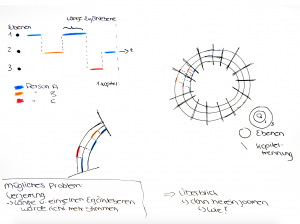 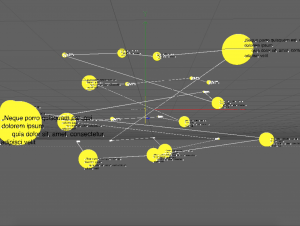 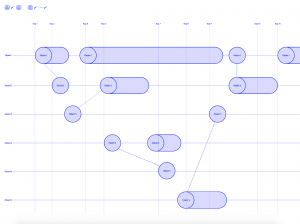 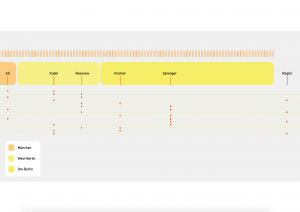 On May 31st our second co-creation workshop took place at the University of Applied Sciences Potsdam. The goal of this workshop was to sharpen the students’ concepts with respect to their ability to help answering narratological questions. In the first part of the workshop the student groups presented their current status followed each by a short discussion. In the second part all of the interface design student groups in Potsdam were assigned one or more students or researchers from Hamburg and worked on reifying their concepts. This session was also meant as a chance for the interface design students to ask questions regarding narratological analysis that they had collected over the past weeks.

In the weeks before there had been some rearrangements within the groups and some conceptual reorientations. At the moment there are six groups and their concepts are summarized in the following.

Idea of this concept is to mark frame narratives and embedded narratives in the text and visualize their nesting on different levels of detail. These representations will be combined with contentual information, so viewers are informed about the interplay between structure and content.

In this circular visualization ring segments represent narrative levels of different order. In the center different relations between levels are visualized, like for example, character networks or the duration and frequency of certain events. 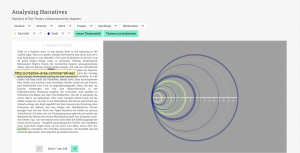 The students developed a tool that let’s you search for the occurrence of words and let’s you manually define topics by putting words together. The distribution of these words can then be visualized. The group is currently looking into other text analysis features that might be helpful for narratological analysis. 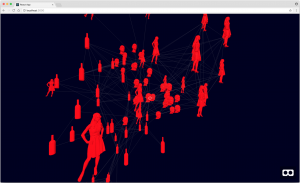 In this concept the attraction and repulsion between different entities (characters, objects, text fragments, for example) in the text is visualized in a VR environment (Google Cardboard). Attributes that influence the degree of attraction or repulsion are, for example, frequency or proximity in the text. Different entities can be pinned to get an impression, how they relate to other entities. This way it becomes possible to assume the perspective of a particular entity. 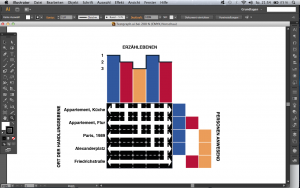 In this concept a set of visual modules allows users to analyze a narrative in a physical way by putting together cards that represent different narratological features, like narrators or narrative levels, their position in the narrative and their interconnections.

Our hope is that this close collaboration between the two student groups over the whole course of the semester continues in such a fruitful way and will eventually lead to visualization tools that are truly user-centered and oriented towards the needs of narratologists.