The 3DH project aims to lay the foundations for a ‘next-generation’ approach to visualisation in and for the Humanities. As for the theoretical background, the project’s frame of reference are the particular epistemological principles that are relevant to hermeneutic disciplines and which must therefore also orientate our approach to visualisation.

For the 3DH visualisation concept we formulate four postulates. These are

During the 2016 summer term we organized a public lecture series on DH visualisations (see also 3DH blog and  https://lecture2go.uni-hamburg.de/l2go/-/get/v/19218).

One outcome of the lecture series was a need for bringing in the expertise of visual design specialists. By bringing together the “two worlds” of literary studies and visual design we hope to transcend the limitations of our respective visual(ising) routines.

In the 2016 summer term we have begun to engage in a co-teaching project with the visual design specialists Marian Dörk and Jan Erik Stange from the University of Applied Science Potsdam. Two groups of students meet during four workshops alternately held in Potsdam and in Hamburg, one a class of German literature master students (Prof. Chris Meister, Universität Hamburg), the second a class of design students (Prof. Marian Dörk).  Their joint goal is  to answer two questions:

The literary text under discussion is the novel Johannisnacht by the German author Uwe Timm, published in 1996. It tells the story of a writer suffering from writer’s block, who gets the opportunity to write a report about the history of the potato. As trivial as this task seems to be at first, the writer’s research becomes more and more a life-threatening and odd adventure. In a formal aesthetic interplay between narratological categories such as the narrator, the discursive parameters of time and place and metafictional elements of self-reflection, Johannisnacht stretches out the genesis and the specific functionalities of narration.

Our two groups approach this text from two different perspectives: the German literature students try to identify and define possible visualisation needs for their work in text analysis (in which they focus on some of the novel’s narratologically salient aspects). The task of the design students on the other hand is to consider the literary text as a whole and find practical solutions for visualising those of its structural features that might be pertinent to the literary scholar’s analytical needs. The combination of both approaches – the narratological/literary studies perspective with the visualisation design perspective- is our first step toward defining a specific narratological visualisation use-case.

First Co-Creation Workshop and its results

After a short input presentation on relevant narratological concepts and methods (Chris Meister) we tried to gain a first understanding of some of the novel’s structural features and then co-created first drafts of visualisations. Our sketches focused on three questions:

Here are our first visualisation ideas:

This sketch tries to point out the narratological category of focalisation in the course of the story. 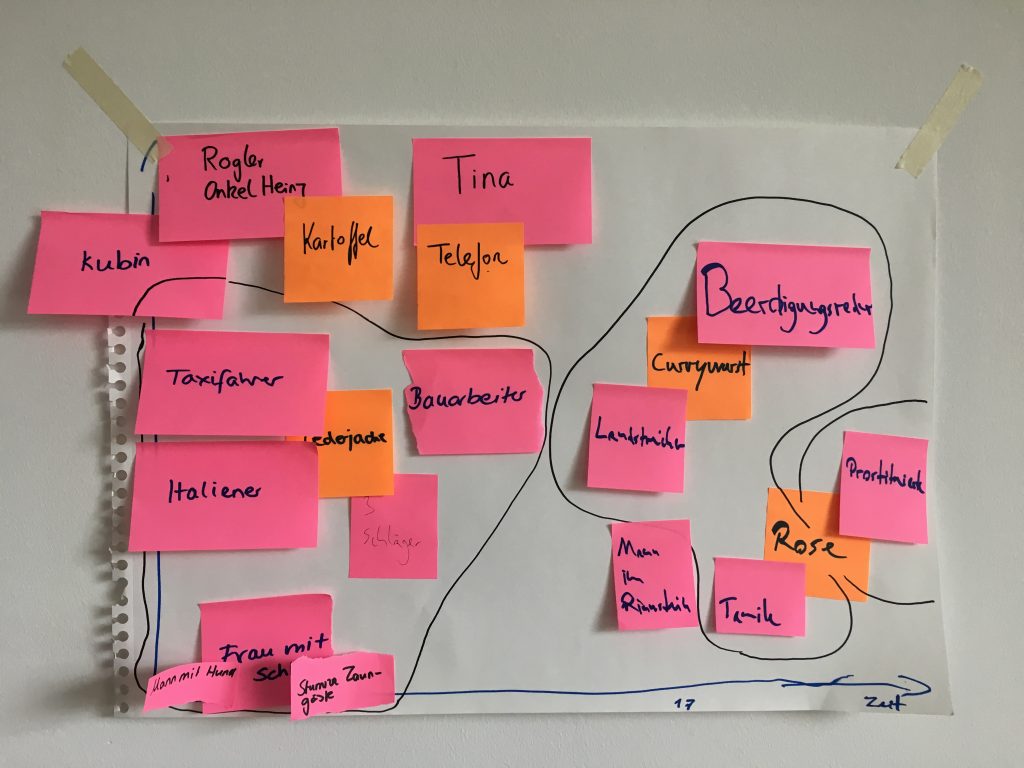 This sketch shows an attempt of structuring the story of the novel by describing the relationship between character, narrator and narrated objects. 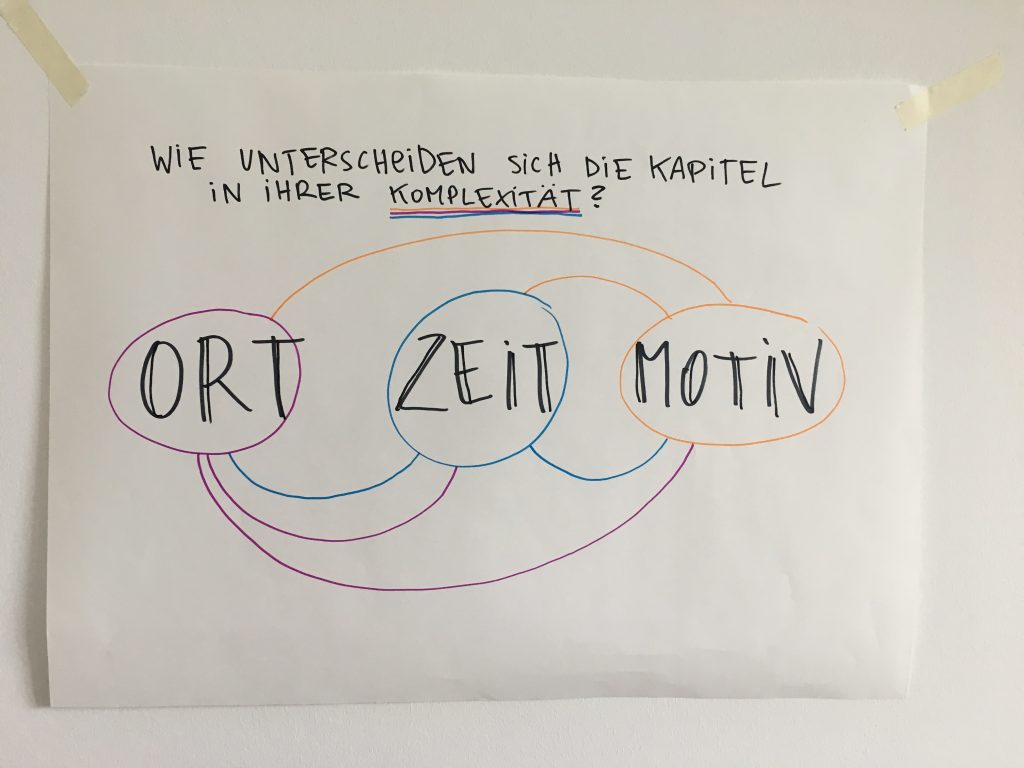 This group gains an access to Johannisnacht by asking ‘What generates complexity in a novel?’ 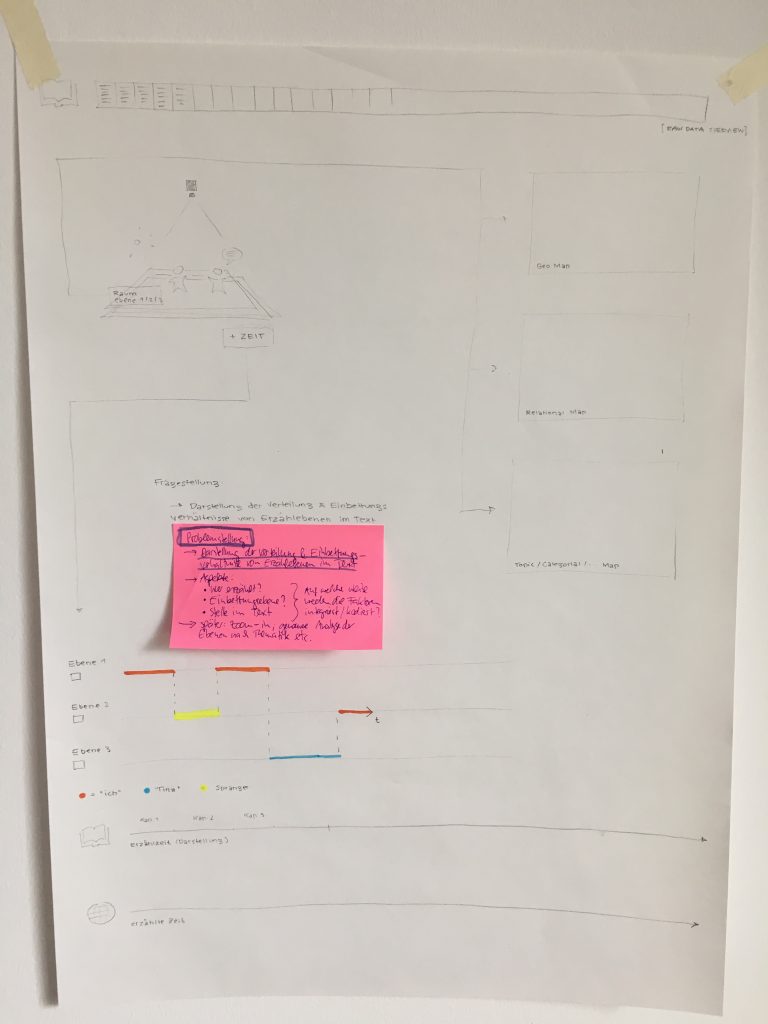 This sketch shows the attempt to visualise the narrative levels of Johannisnacht. 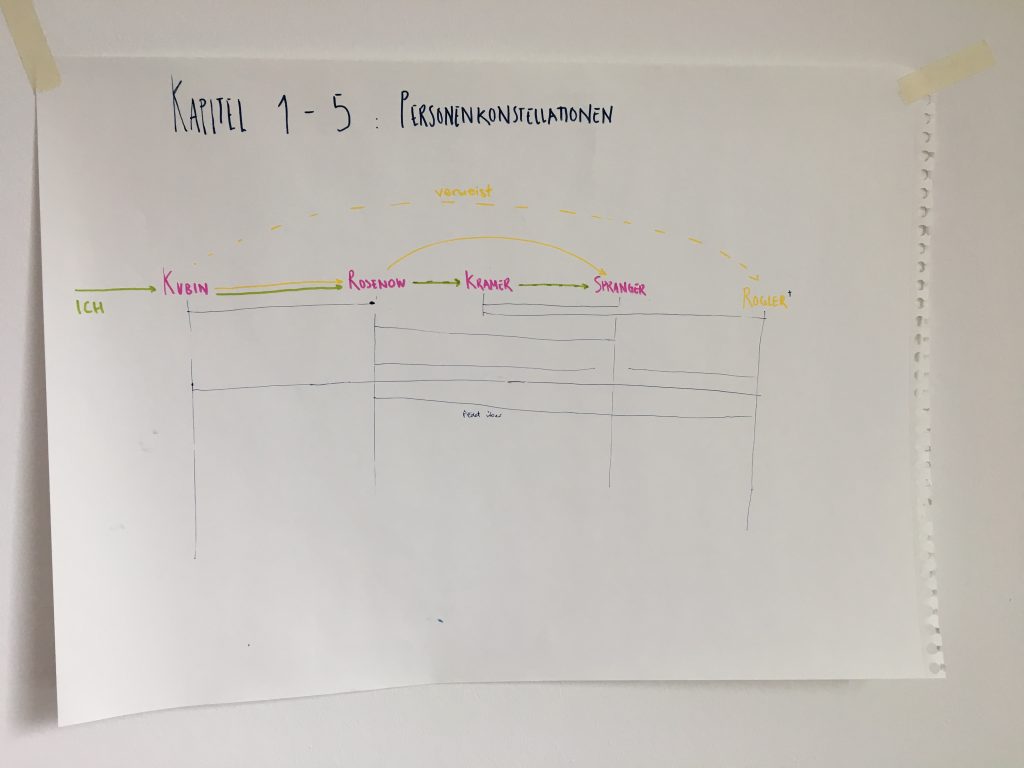 This group focuses on the character constellation in the novel Johannisnacht: Who is talking about whom? On which narrative level is a character introduced?