Geoffrey Rockwell ran a Voyant workshop for interested students and faculty on Thursday the 16th of June. The workshop used this script.

Johanna Drucker gave a special lecture on June 6th that reported on the state of the project and where we are going. She started by giving some history to the 3DH project. We went from “create the next generation of visualizations in the digital humanities?” to a more nuanced goal:

Can we augment current visualizations to better serve humanists and, at the same time, make humanistic methods into systematic visualizations that are useful across disciplines outside the humanities?

She commented that there is no lack of visualizations, but most of them have their origins in the sciences. Further, evidence and argument get collapsed in visualization, something we want to tease apart. In doing this, can we create a set of visualization conventions that make humanities methods useful to other disciplines? Some of the things important to the humanities that we want to make evidence include: partial evidence, situated knowledge, and complex and non-singular interpretations.

Project development is part of what we have been focusing on. We have had to ask ourselves “what is the problem?” We had to break the problem down, agree on practices, frame the project, and sketch ideas.

Johanna talked about how we ran a charette on what was outside the frame. She showed some of the designs. Now we have a bunch of design challenges for inside the frame. One principle we are working with is that a visualization can’t be only data driven. There has to be a dialogue between the graphical display and the data. Thus we can have visualization driven data and vice versa.

We broke the tasks down to:

The Canadian Society for Digital Humanities 2016 conference was held this year in Calgary, Alberta. Milena Radzikowska presented a paper on “Materializing Text Analytical Experiences: Taking Bubblelines Literally” in which she showed a physical system designed to materialize a Bubblelines visualization. (Bubblelines is a tool in the Voyant suite of tools.) In here talk she demonstrated the materialization filling tubes with different coloured sand for the words “open” and “free” as they appeared in a text. She talked about how the materialization changed her sense of time and visualization. Read more about the conference in Geoffrey Rockwell’s conference report.

We have been gathering images like the Ole Wurm’s Cabinet that can inspire our thinking about visualization. I gathered some from my travels and share them here (see my Flickr account for more.) The image above is of a detail between chapels on the convent side of San Maurizio in Milan. Not only is it a humorous detail between “important” images, but it also shows someone leaning out and looking at the fresco. This reminds me of Johanna Drucker’s point about portraying the perspective of the viewer back into visualizations. Further, the image shows something common in church frescos: the painting of architectural (3D) detail that couldn’t be afforded. The architectural detail in turn has its own tradition. 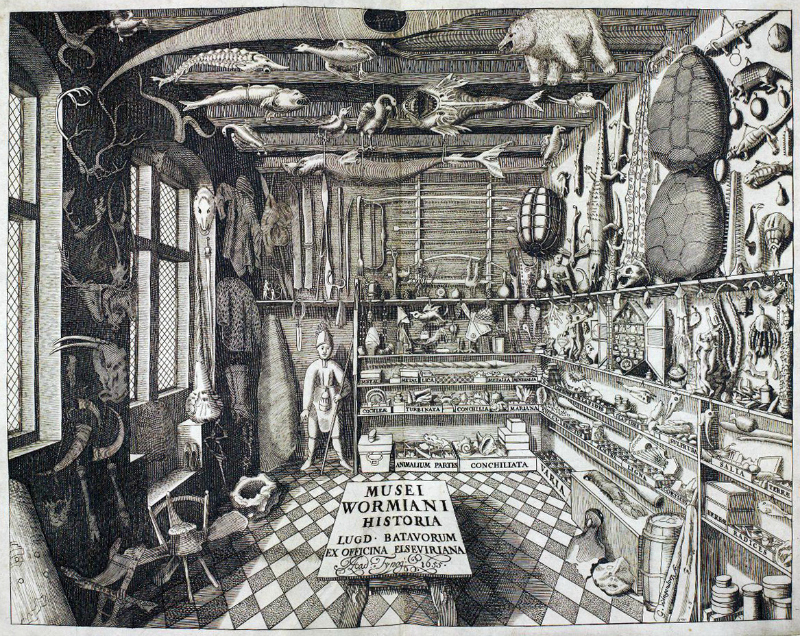 We have been gathering examples from the history of art and science and Johanna Drucker suggested the illustration of Ole Worm‘s Cabinet (above.) This image was the frontispeice to Museum Wormianum and it shows how much can be shown using space and tone.